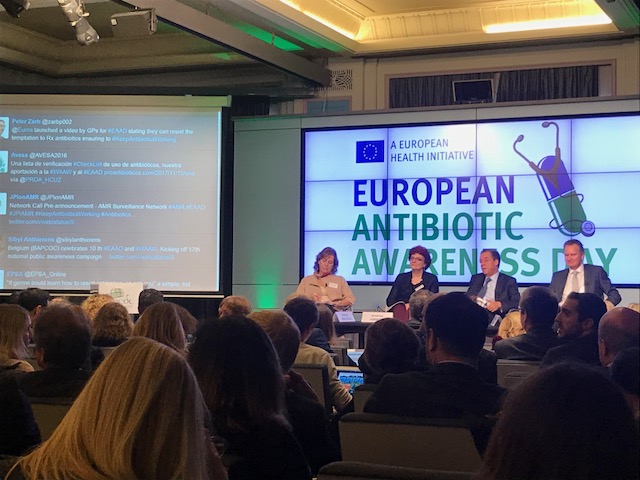 As always, the European Antibiotics Awareness day is a big day for us and many many other projects and organisations who work tirelessly to find solutions and make improvements in order to harness Antibiotic resistance. On November 15th, many gathered in Brussels , to make announcements  marking the 10th European Antibiotic Awareness Day at an EU-level event entitled ‘Keeping antibiotics working’.  Speakers from the European Commission and WHO Regional Office for Europe, amongst others, presented new data on antibiotic consumption and antibiotic resistance, and reviewed the current situation and future steps at the European level.

During the session in the morning JPIAMRs Laura Marin had a few moments in the auditorium to share the two Calls that is going to be launched in 2018. First, the 6th Call on “New Targets, New Compounds and Tools”, in January 2018 and later that year the “Surveillance Network Call”.

Social media was key during this day and at the EAAD event too. The twitter flow was steady on the huge screen who tracked the hashtags #EAAD2017 and #KeepAntibioticsWorking. And JPIAMR published several news releases and tailored templates with key messages in social media.

All in all a successful day and we are looking forward to next years EAAD.

You can always find JPIAMR tweets here and keep following us for more news and announcements.