Antimicrobial Resistance (AMR) is a topic that is difficult to escape at the moment, but that’s a good thing because it means it 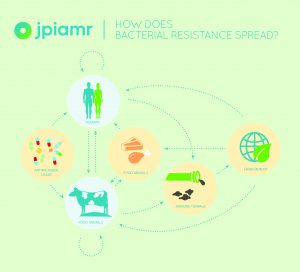 is getting the attention that it really does need. The news recently of bacteria being found in China that were resistant to the drug of last resort – colistin – in a way which allowed them to transmit this resistance to other bacteria, has only increased fears of further world-wide spread of this phenomenon and the coming of a post-antibiotic era. It also highlights the importance of international cooperation and the need for further research into how resistance spreads – it is said that the resistance in China emerged after colistin was overused in farm animals. The AMR Review Team, chaired by Economist Jim O’Neill, has today published its latest report on antimicrobials and the environment, giving an overview of the scale of antimicrobial use in global food production and making suggestions about how policies to lower their use could be implemented. The report is well worth a read.

The S&I Network in Europe has also been busy with its fair share of events to highlight the importance of AMR, working closely with the UK Chief Medical Officer Professor Dame Sally Davies to raise awareness of the UK’s work to tackle the issue. Our team in Germany, for example, hosted an event back in May with Dame Sally to promote the Longitude Prize to potential German competitors, and Switzerland hosted a similar event just last week. For those of you who don’t know about the Longitude Prize, it is a £10m prize managed by NESTA to encourage innovation to develop a rapid diagnostic tool that can differentiate between bacterial and viral infections – something which would help reduce the overuse of antibiotics, which greatly contributes to resistance.

But back to how resistance spreads – or transmission dynamics, as the experts say. This is a topic that the EU’s Joint Programming Initiative on AMR and its member countries and the UK’s Medical Research Council have identified as one of the key areas where we need to know more. And what is interesting about transmission is that you need to get a lot of different people with different expertise in the room – not just doctors and clinicians, but veterinarians and environmental scientists too. And it needs to be an international affair. That was why the S&I Network teams in France and Germany teamed up with the JPI-AMR and the MRC to bring together a diverse group of scientists who have different pockets of expertise to bring to the overall knowledge base. At a workshop in Berlin in October 2015 chaired by Professor Bruno Gonzalez-Zorn , we heard from specialists about transmission within the hospital setting, as well as scientists working to understand how resistance is disseminated in the environment and others who look at how transfer occurs between animals and humans. We were also lucky enough to have Dame Sally Davies come to set out how she and others are explaining to politicians across the globe about why we need multidisciplinary research around transmission to build up an evidence base for effective policymaking. It was great to see the reactions from the researchers – they were glad to have someone advocating the necessity of their work at the highest levels.

At the end of one of these workshops, I always get the sense that I have really started to understand the topics under discussion. But as time goes on and I start to concentrate on other work strands I start to forget what the real challenges are. That’s why it is always good to have a reminder at hand to explain it again. And so I leave you with a short video from Dame Sally about why the One Health approach is so important – because unfortunately bugs don’t work in silos…

For more videos, go to the JPIAMR video page.

If you’re a researcher, JPIAMR is soon launching a call on transmission dynamics. Read more!